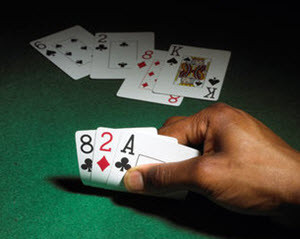 Seven Card Stud is an old school poker game that retains plenty of players. Players start the game with an ante and each player places the same amount into a pot. The goal is to have the best five-card hand and the game starts with three cards. Two cards are dealt face down and one faces up and players receive more cards as the game continues.

Each card that is dealt after the initial three cards require a new bet which is followed by another down-facing card. When the last card is dealt, a final round of betting commences. The player with the best five-card hand is the winner.

Active players will decide which of the seven cards make the best winning combination and discard the other two cards. The highest possible hand is a five of a kind, which can only be gained when you have a minimum of one wild card.