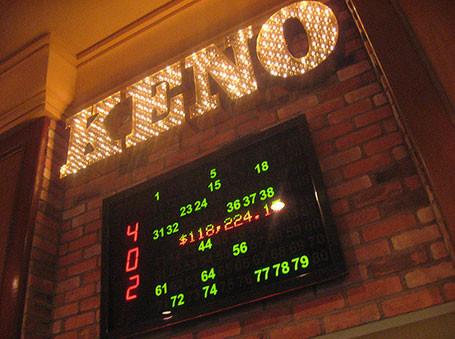 Although the word Keno originates from French or Latin, this game was first played in Ancient China. This is a lottery-type game which was originally played with sheets of paper that had Chinese characters printed on them. Due to the fact that this game was so popular at the time the proceeds from the game were used to fund the building of the great wall of China.

To play Keno, the bettors will choose numbers between 1 and 80 and place wagers on these numbers. Once all players in the game have placed their bets 20 numbers will be selected. This is done with a ball machine or with a random number generator. Once all 20 numbers have been selected players receive a payout that is determined by the amount of numbers they have selected, how many matches they have in their selection as well as the wager that the player has made. Although there are many variations of Keno, the basic principle behind the game remains the same no matter where you play.

When one hears that the probability of getting a hit on all twenty numbers is 1 in 3,535,316,142,212,174,320 it may seem that you will never score big. However, when you only focus on getting hits on at least half of the numbers then the probability of you winning becomes more attainable at 1 in 253.801.