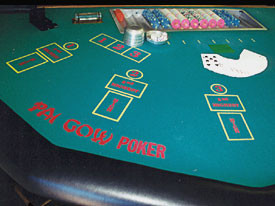 This game originated in China and grew in popularity across the globe. Pai Gow can be played in one of two different ways. The original variation of this game was played with dominoes. As the game evolved, the rules were adapted to allow it to be played with a standard deck of cards. When played with cards, this game is known as Pai Gow poker.

Pai Gow poker is played with six players and the banker and the aim goal is to defeat the banker. Each player is dealt seven cards and the card that scores the highest is the winner. The traditional variation of the game the dominoes are shuffled on the table and placed face down in eight stacks, with four tiles in a stack. After bets are made, each player is given a stack that is divided into two hands known as a front and rear hand. A player wins when their front and rear hands exceed the hands held by the dealer.

When playing Pai Gow, there are 35,960 different ways to select your tiles. Although this game may seem complicated with difficult odds, once the basic principles are understood it is a straight forward and enjoyable game.