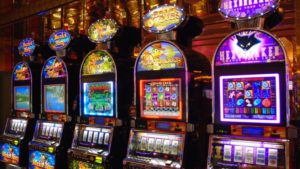 One of the casino industries’ most popular games is slot machines. Other names it is called include fruit machine and one-armed bandit. This gambling device was first used in land-based casinos where players had to insert coins and pulling a handle to activate the reels.

Later years a button was added to spin the reels. Initially, a slot machine was an automatic vending machine, but with the growth of gambling, it exclusively refers to a gambling machine. The first modern slot machine was invented in 1894 by Charles August Fey. In 1898, the first three-reel slot machine that had auto cash payouts was built and called a Card Bell that featured playing cards to form poker hands. A year later the Liberty Bell was designed and in 1909 there were around 3,300 slot machines in Chicago.

Modern slot machines, however, have electronics that are set for payout frequency with the casinos deciding on house advantage. The largest profit generator for any casino, both land-based and online casinos is a slot machine.

The casino industries compete to provide players with unconventional layouts, an endless number of symbols, more than five reels and winning lines, special games features along with imaginative and innovative bonus rounds.