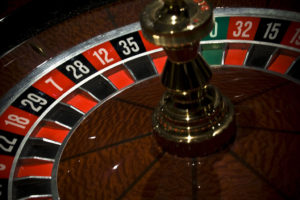 The game of Roulette got its name from the French word for wheel, which is a large feature of this well-liked casino game. The first variation of this game was played in 17th century France. As it grew in popularity it started being played in a variety of different countries until it became a global phenomenon.

Players who gather around the Roulette wheel will place their bets before the wheel is spun. Bets can be made on individual numbers, groupings of numbers, high or low numbers, odd or even numbers or the colours black or red. The wheel is then spun in one direction while the dealer drops the ball in a different direction. As the wheel comes to a standstill, the ball loses momentum until it comes to a stop on the winning number.

The Roulette wheel you are playing on will vary depending on the style in which you are playing. This includes French, American or European styles. When you play Roulette you have a 50-50 chance of winning if you are using a novice strategy to play which is usually sticking to black or red. If you do end up winning it has an astounding payout rate of 36-1.