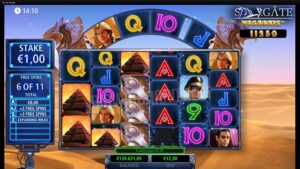 Stargate Megaways is a branded slot by SG Digital based on the original movie that starred Kurt Russel as Colonel O’Neil the hard and stoic no-nonsense commander tasked to explore the alien world of Abydos. Featured on aussie online casino step into SG Digitals virtual recreation utilizing a 6 reel main grid and 4 positioned horizontal reel offering 324 to 117649 paylines. The game’s RTP is 96.13% has a max win of 25000x and is packed with features like the Cascades, a Trail Bonus feature, Trail 5 Modifiers, Bonus Game, and a Buy Pass Feature.

The Cascades are common features in Megaways slots so we won’t go into detail on that feature instead we will move on to the Trail feature. On the left-hand side of the game, there is a nine segmented trail and with each winning cascade, the trail position moves by 1+. When players get to the fifth segment a random modifier gets applied and they are as follows:

Reach the seventh segment and you are awarded the Bonus. The trail is only active during the base game, and it resets at the start of each new spin.

As previously mentioned, the Bonus Game gets triggered when you reach the 7th, 8th or 9th segment and players receive 6, 7 or 8 Free Spins respectively. They then open 7 doors to reveal nothing or modifiers that are constant during the Bonus round. The prizes include 1-25, Win Multipliers, Ways Increase, Cash Prizes of between 5 and 100x your stake, Reincarnate, Wild Gates and Expanding Wilds. free spins

It’s a branded slot ready to play at real money casino websites that is immersive and packed with generous bonus features and a solid monetary max win of 25000x your stake. SG Digital have done an amazing job of reproducing this blockbuster bringing the magic to the reels of the game.